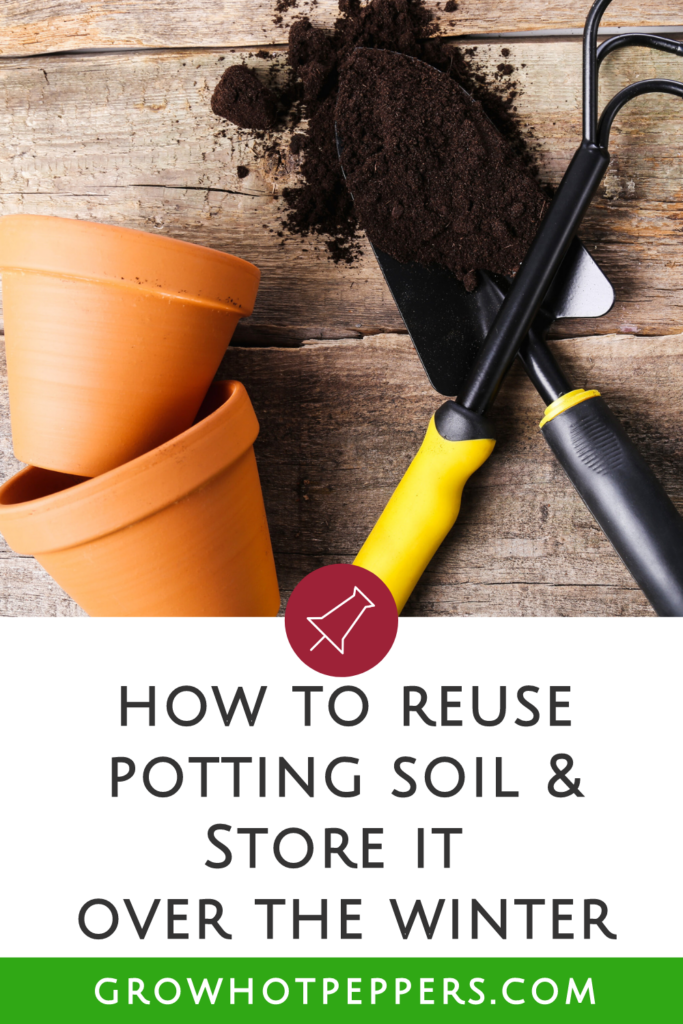 Can you reuse potting soil? That’s a good question when you’re a container gardener.

Buying new bags of container mix gets really expensive. If you’re only growing something in one pot, it’s not that big of a deal.

However, if you have large barrels or a bunch of containers going at once, that’s pricey. It’s also very tedious to move all those bags around! (I usually have 15 or so grow bags and pots going at a time, so I started doing this awhile back.)

So, yes, you can reuse potting soil. You just need to know how to prepare and revitalize it first.

(To clarify, new potting soil or compost is still needed to refresh your mix, but you’ll need a lot less of it. The new mix is being used as a supplement instead of filling the whole pot.)

The following information explains what you need to know beforehand, and how to recharge potting soil so it’s done right.

Before starting, here are some things to be aware of before you attempt to amend your soil.

Can I Reuse Soil From A Dead Plant?

You should know why your plant died before reusing the soil. In other words, if it was due to bug infestation or disease, don’t use it. Those same problems will affect your new plants.

You can, however, sterilize your potting soil to make it safer to use. It’s still risky to use diseased or infested soil even after this process. Personally, I skip it.

How To Revitalize and Reuse Potting Soil

The first thing is to get rid of any existing plants, roots or other debris in the soil. Take some time to dig through the layers of mix and get as much out as you can.

Sterilizing Potting Soil In The Sun

Sterilizing your potting mix makes sure you get rid of potential threats including pests, weed seeds and bug eggs. It’s a way to make sure these types of problems don’t transfer to your new plants.

The sun can solarize your soil and effectively sterilize it.

One way to do this is to put your potting soil in black garbage bags during hot weather. Then simply leave them out in the sun for 4 to 6 weeks.

Note: You can use your oven, instead of the sun, to sterilize soil. I’ve never done it this way because I find it too messy. Here’s a link from PennState Extension that explains the process in case you’re interested.

Adding Nutrients Back To Potting Soil

When your soil is done baking in the sun, the next step is put some nourishment back in the mix.

Put your soil on a tarp or other large container where you can amend it. You can use a trowel or gloved hands to fluff it up first so it’s not compact and has good airflow.

First, add fresh potting soil or compost to the existing soil. You can do 25% new soil mix or compost to 75% old soil. If your old soil is more than a couple of years old or if you’re growing heavy feeders (like tomatoes), use a ratio of 50/50.

Next, add fertilizer to the mix. Some popular options are liquid fertilizers like fish and seaweed. You can also use an organic, slow-release product suitable for vegetables.

Lastly, water the refreshed mix and add your plant(s).

How To Store Potting Soil Over Winter

If you decide that you want to continue reusing potting soil from your containers, you can easily store it so it’s ready when you need it.

Fortunately, it’s very simple to do. Just keep the soil dry. You can put a lid of some sort on the plant container, or put the mix in garbage cans or bins with lids.

And, don’t worry about the potting soil freezing. It’s actually a good thing. Those lower temperatures create an inhospitable environment for the bug eggs that are likely present.

Another thing you can do to keep your potting soil as healthy as possible, is to plant different families of vegetables in a particular batch of soil.

If you grow peppers, for example, reuse that potting soil to grow leafy greens. After the greens are done growing, use the soil to plant something else like legumes.

This practice limits soil-borne disease and pest activity similar to how crop rotations work in a traditional veggie garden.

I hope this helps you save on potting soil and extend the life of your resources!

As an Amazon Associate and member of other affiliate programs, I earn from qualifying purchases.

Did you grow this plant?

2 thoughts on “Can You Reuse Potting Soil? Here’s What You Need to Know”