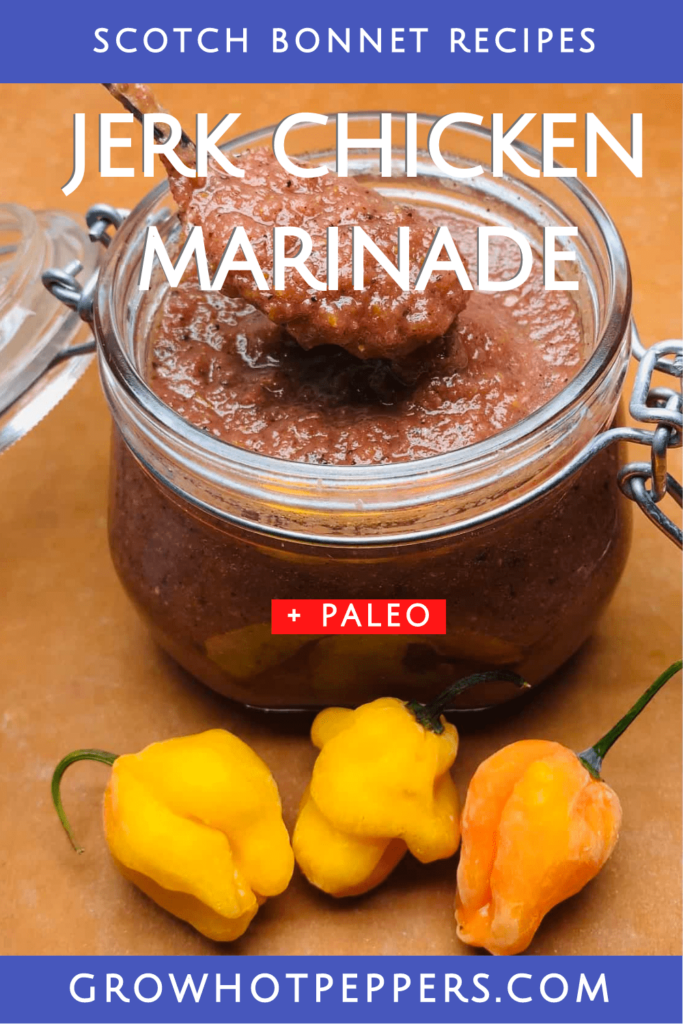 Love heat? Here’s a recipe for a spicy and easy jerk marinade. Scotch Bonnet peppers are the star of the show, along with a variety of aromatic spices. This Scotch Bonnet recipe doubles as a finishing sauce and is perfect for foods like chicken, fish, cauliflower steaks and veggies. It’s fiery, vibrant and Paleo too!

My hometown has a Caribbean restaurant that makes absolutely mouthwatering jerk chicken. Ever since I tasted Jerk flavors, I’ve always loved this brilliant combination of spices and heat.

By the way, Jerk is native to Jamaica, and it refers to a style of cooking and seasoning used in this cuisine. Scotch Bonnet peppers are a primary ingredient in Jerk.

Because I have a supply of Scotch Bonnets (and a massive craving), I spent some time researching Jamaican jerk marinades with Scotch Bonnet peppers.

Jerk recipes use soy sauce, which I’m allergic to, so I made adjustments to fit the Paleo diet. You’ll find notes on the standard recipe in case you don’t have the same dietary restrictions.

Before we get to the recipe for this Scotch Bonnet jerk marinade, let’s talk ingredients.

What Is Jerk Marinade Made Of?

During my research, I found that jerk marinade recipes differ a bit but generally use a lot of the same ingredients. (Here’s more on Jamaican cuisine in case you’re interested.)

Other jerk marinades and sauces may also include cloves, white or apple cider vinegar, pineapple or orange juice and Red Stripe beer.

It’s not always easy to find all the spices you need for a recipe. Spiceology is an online shop that has all kinds of ground spices, Jamaican jerk blends and more.

What Are the 3 Main Ingredients Of Jerk?

No matter the recipe, Jamaican Jerk marinades typically include the same three ingredients. They often differ in quantity, depending on your preferences.

Scotch Bonnets aren’t commonly available so check Caribbean markets or specialty grocers like Whole Foods and Trader Joe’s. If you can’t get these peppers locally, you can often buy fresh Scotch Bonnet pepper pods on Etsy. Otherwise, habanero peppers are a suitable replacement in jerk sauces and marinades.

» Related: How To Grow Your Own Peppers So You Don’t Have To Rely On Stores

You may not be familiar with the flavors of all the jerk spices or the Scotch Bonnet pepper. Jamaican jerk sauce is commonly described as citrusy, earthy and mildly sweet. It’s also very hot if you use Scotch Bonnets or Habaneros in your recipe!

This Jamaican jerk marinade is definitely on the hotter side because of the chilies. In my opinion, Scotch Bonnets have a heat level that’s similar to Habanero peppers.

If you prefer less heat, you can always reduce the number of peppers you use. I’ve also seen milder chilies, such as Serranos or Jalapenos, listed in Jerk recipes. Some recipes even omit the peppers altogether.

Don’t forget to wear gloves when handling your Scotch Bonnets. These peppers are hot!

How To Use Jerk Sauce

Jerk sauce can be used on a variety of proteins including seafood, chicken, beef and pork. You can also use it on grilled veggies and tofu.

To use jerk as a marinade, pour it over your veggies and allow it to sit in the refrigerator for about an hour. If marinating meats, let it sit overnight so the flavors can really get absorbed. For chicken, be sure to get the jerk chicken marinade under the skin too.

To use jerk as a finishing sauce, spoon the sauce over your cooked veggies or meats (like these air fryer boneless chicken thighs). You can also use this sauce as a dip, add it to sandwiches, use it as a topping on rice or drop a couple of spoonfuls in soups and stews.

Can You Freeze Jerk Marinade?

So, how long can you keep jerk marinade? Jerk marinade lasts in the refrigerator for up to one week. Otherwise, you can freeze your marinade for up to six months.

Making this Scotch Bonnet jerk marinade is simply a matter of blending the ingredients in a food processor or blender until you get the consistency you like. Afterward, you can let your sauce simmer for an hour to mingle the flavors, or put it in a sealable container and stick it in the refrigerator.

I hope you enjoy this jerk recipe. It’s a great way to use up a few Scotch Bonnets! 😀

As an Amazon Associate and member of other affiliate programs, I earn from qualifying purchases.

Did you make this recipe?