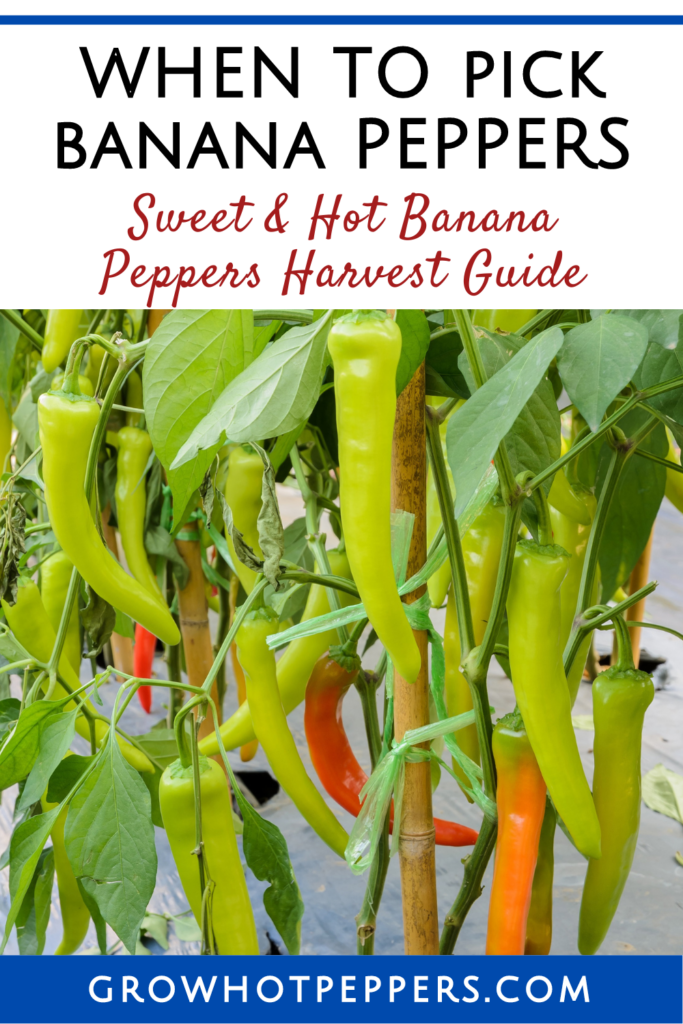 Wondering when to pick Banana peppers? Generally, Banana chilies are ready about 60 to 75 days after transplant. Picking also depends on the Banana pepper variety (hot or sweet) and how you want to eat them. Here’s how to tell when Banana peppers are ripe in all cases.

When I first started growing Banana peppers, it was exciting to watch the flowers develop and see those tiny peppers come in a couple of weeks later. As the fruits got bigger, I couldn’t wait to harvest.

I’ve learned a few things along the way and have found that Banana chilies are best picked on the earlier side for a crunchier texture. But like other pepper plants, you can eat these chilies at any stage. It just depends on how you want to use them.

So while Banana peppers are typically ready within 75 days after transplant, what if you want to know when to pick hot Banana peppers or when to harvest peppers for pickling? Find all these answers here and more.

What Should You Look For In Banana Peppers?

Banana peppers are typically 4 to 6 inches long when they’re ready for picking. Besides size, look for peppers that have gone from green to a slightly yellow color. When Banana peppers are yellow, they have the strongest flavor and crispiest texture.

If you leave Banana peppers on the plant, they’ll go orange and eventually turn red when fully ripe. Orange and red Banana peppers tend to be milder, sweeter and the skin is a bit softer.

All stages of the Banana pepper are edible, so pick at different times to see what you like best! Generally, you can leave fruit on the plant for about a week before the color change starts happening.

It helps to know what types of Banana peppers you’re growing so you have a better understanding of when to pick them. Sweet Banana peppers are the most common, followed by hot Banana varieties.

Sweet Banana Peppers: These long, curved, yellow peppers resemble bananas, and go from a bright yellow to a reddish-orange and finally to red once mature. This variety has little to no heat, and it’s more on par with Bell peppers, Pimientos and Pepperoncini peppers.

Hot Banana Peppers: The hot Banana variety is a mildly hot pepper at 5,000 to 10,000 Scoville heat units, which is similar to a Jalapeno. The fruits are 6 to 8 inches long, and they take between 65 to 85 days to mature. Like the sweet variety, they go from green to bright red.

» Related: What Is the Scoville Scale for Peppers?

The Hungarian Wax pepper (a.k.a. yellow wax pepper) is usually confused with a Banana pepper because it has a similar appearance and flavor. It’s actually a hotter pepper and closer to the top range of a hot Banana pepper or Jalapeno.

When To Pick Banana Peppers Off The Plant

After your Banana peppers are at least 4 inches long and they are just turning yellow, it’s time for picking!

When To Harvest Sweet Banana Peppers: Pick in the immature greenish-yellow stage for pickling or for adding raw Banana peppers to food. You can also eat them in the red stage if you want a softer, sweeter Banana pepper.

So, why pick Banana peppers in the immature stage before they’re ripe? Picking earlier in the pale yellow stage gives you Banana peppers with a vibrant flavor and crunchier texture. This is ideal for fresh eating and making pickled Banana peppers. Another bonus is that your pepper plants have time to produce more chilies throughout the season.

On the other hand, harvest red peppers if you want to save Banana pepper seeds. Fully ripe peppers are more likely to have viable seeds that you can use to start new plants.

» Related: How to Save Chilli Seeds

How To Harvest Banana Peppers

When you’re ready to pick Banana peppers, you can just gently snap them off of the plant with your hands. Hold the branch with one hand and use the other hand to give the pepper a quick twist to make it come off easily.

If you’re worried about breaking branches, use clean garden shears instead. Just hold the pepper and cut it anywhere along the stem.

The ideal time of day for picking Banana peppers is the morning hours before the sun gets too hot. Plucking fruits can be a bit stressful for the plant, so harvesting before the heat is best.

What To Do With Banana Peppers After Picking

You have several ways that you can use your Banana peppers. The sweet, tangy taste makes these peppers ideal for pickling. Another popular option is to make stuffed Banana peppers by adding meat, cheese or rice. You can also sauté them for recipes, roast them in the oven, use them in salsa and add sliced Banana peppers to eat fresh on pizza, salads, sandwiches and other foods.

How To Store Banana Peppers

If you’re not going to use your Banana peppers right away, put them in the vegetable drawer of your refrigerator so that they last for two weeks. Just put your unwashed peppers in a plastic bag first and leave the bag slightly open for air circulation.

To preserve your Banana peppers for up to eight months, pop them in the freezer. This time, wash and dry your peppers and then place them in freezer bags. Frozen Banana peppers can be added right into foods like soups, stews, stir frys and fajitas.

» Related: How to Store Chilli Peppers

As your Banana pepper plants grow throughout the season, you can expect to get somewhere between 25 to 50 pods per plant. Be sure to pick often to stimulate plants to make more flowers and fruits.

And, if you’re wondering whether Banana peppers ripen off the vine, the answer is yes. It’s more likely to happen if the Banana peppers have already started to turn yellow. Leave your peppers at room temperature, near a windowsill if possible, and give them about a week to mature.

Can you use bananas to ripen Banana peppers?

Some people believe that you can use bananas to ripen your Banana peppers. Scientific studies are still unsure whether or not the presence of ethylene gas, which ripening bananas release, affects Banana peppers.

Are Banana peppers hotter than Jalapenos?

Typical Banana peppers have little to no heat as they rank between 0 and 500 Scoville Heat Units (SHU) on the heat scale. Compared to Jalapenos, which are between 2,500 to 8,000 SHU, Banana peppers are at least five times cooler.

Why are your Banana peppers still green?

Will Banana pepper plants come back?

You can bring pepper plants indoors for the winter to keep them going for more than one season. Check out this guide to overwintering peppers for all the steps.

Are Banana peppers a fruit?

Botanically speaking, Banana peppers like all chiles are a fruit. Growers and people in the culinary world generally call peppers a vegetable. Here’s more on whether peppers are a fruit or veggie.

I hope this article gives you a better understanding of when to pick Banana peppers. To sum up, start harvesting when they’re pale to bright yellow and 4 to 6 inches long.

If you’re growing other pepper varieties, be sure to check out this guide on when to harvest chili peppers. You’ll get harvest information for different varieties and learn how to store peppers.