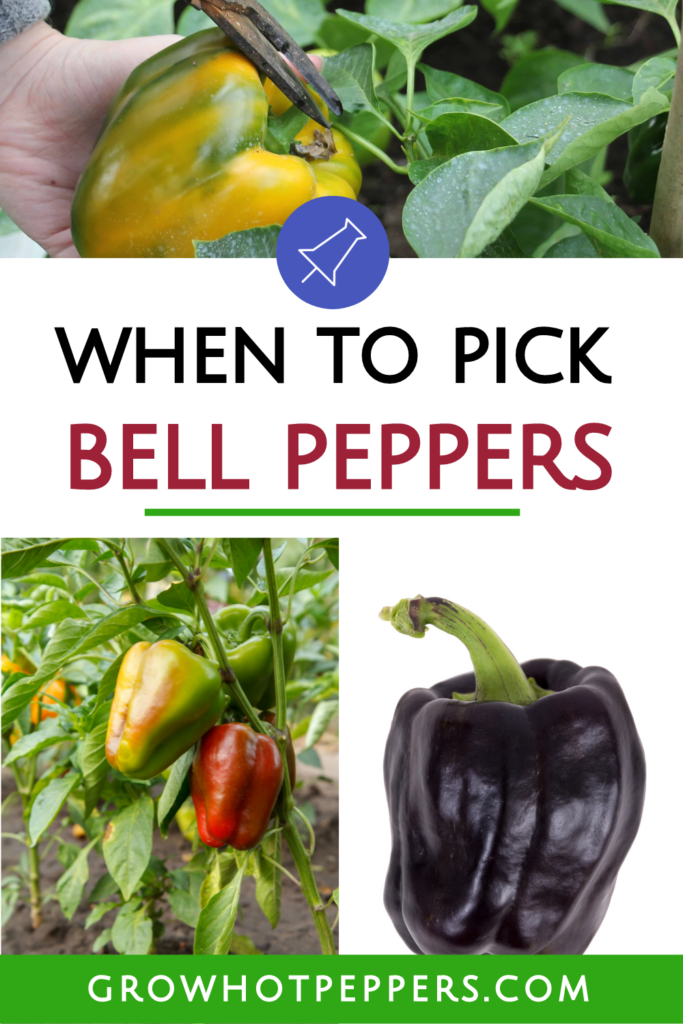 Thinking about when to pick Bell peppers? Here’s the short answer: Bell peppers are ready to harvest 60 – 90 days after transplant, when they’re 3 to 7 inches long and about 4 inches wide. When you know the signs of ripeness, you can pick more often and, ultimately, harvest more peppers from your plant.

Bell pepper plants produce less fruit than other varieties of chili pepper. (Generally, up to 10 peppers during a growing season.) Even more, if not harvested in time, they can start to go bad.

I’m guessing you want to enjoy everything your plant grows, so let’s get into the details of when to pick Bell peppers. And, if you’re wondering what to do with your harvest, you’ll also find this answer (and more).

When determining whether a Bell pepper is good, the first thing to look at is the color. Healthy Bell peppers can be green, orange, yellow, purple, or red – their color will usually change throughout the ripening process. You can eat them at any stage, but for really sweet peppers, let them stay longer on the plant.

What you don’t want to see are dark spots on the outside of your peppers because this could be a sign of blossom end rot (BER). This condition is caused by a calcium deficiency and can result in the pepper turning black and rotting [source].

» Related – Fertilizer for Peppers: Here’s What You Need to Keep Them Healthy

You’ll also want to look at the inside. A healthy Bell pepper should have sturdy walls, about 0.2 to 0.4 inches thick. It should be hollow, with a cluster of seeds in the middle.

can you eat peppers with blossom end rot?

Despite the unsavory appearance, you can eat peppers with blossom end rot because it’s not a condition caused by a virus, bacterium or fungus. Simply cut out the affected portions of the pepper and enjoy the rest. [source]

How To Know When To Pick Bell Peppers

Harvesting Bell peppers when they’re ripe gives you chilies with the best flavor and texture. But how can you tell when they’re at their best?

Days To Maturity: 60 – 90 days after transplanting

When Bell peppers are ripe and ready to harvest, they will be the full color of whichever variety you have planted. Most will turn from green to red when ripe.

If you’re seeing unripe green Bell peppers on your plant, you might be wondering if you should harvest some of them before they fully ripen. I don’t recommend picking Bell peppers before they’re fully grown. They’ll be less sweet and more earthy in flavor if you do.

That doesn’t mean you can’t harvest green Bell peppers. As long as they’ve reached their full size and have turned a darker shade of green, they’re good to go!

All Bell peppers are green at first. But how long does it take each pepper variety to change color? The answer depends on which variety of Bell pepper you’re growing.

It takes between 60 and 90 days for Bell peppers to ripen. Green peppers are always the first to be ready, and if you leave them on the vine, they’ll turn yellow, then orange, then red.

If you’re growing purple Bell peppers, you’ll want to pick them when they’re dark in color (almost a blackish brown) all over. This should be around 70 – 80 days after transplanting.

As for flavor, orange, yellow and red peppers have a sweeter, fruitier taste, and are delicious on their own as a snack. On the other hand, green and purple varieties taste slightly bitter and vegetal.

Yellow, orange, and red Bell peppers are also slightly more nutritious than their green counterparts. This is because after ripening, they have more vitamin C and beta-carotene in them [source].

How And When To Harvest Bell Peppers

If your Bell peppers are ripe and ready to harvest, here’s how to pick peppers without damaging the plant. It’s best to use sharp scissors or shears to cut them off at the stems. Aim to harvest them in the morning, after any dew has dried, but before the sun’s at its brightest. This is when they’ll be at their crispiest and juiciest.

So will your green peppers continue to ripen after picking? The answer is yes – as long as you pick them after the ripening process begins. Pop them in a small container and keep them at room temperature, and you should have fully ripe Bell peppers after a week or two.

There’s a good reason why you might want to harvest Bell peppers before they reach full maturity – doing so actually encourages more peppers to grow. Plus, if you pick a few peppers as they start to ripen, more of the plant’s energy can go towards helping the remaining fruits grow, which means they should reach maturity sooner.

What To Do With Fresh Bell Peppers

After harvesting peppers, what can you do with them? Thanks to their sweet, mild flavor, raw Bell peppers (like Pimentos) make a delicious snack either on their own or dipped in hummus. You can also make stuffed peppers with rice, meat, and other veggies, and roast them in the oven for a healthy lunch. And, they’re delicious in fajitas, stir-fries and shredded beef enchiladas.

There’s no need to wash Bell peppers after harvesting them. Just wipe off any dirt and they’ll be ready to eat.

Don’t forget to save your seeds, too – you can use them to grow new plants! Here’s how.

How To Store Picked Bell Peppers

The best place to store peppers once picked is in the vegetable drawer in your refrigerator. Pop them into a plastic bag first, and either poke some holes or leave the bag open a bit to help air circulate. Bell peppers generally last between 1 and 2 weeks in the refrigerator.

Chopping and freezing your peppers is a good idea if you want to make quick and easy meals in the future – frozen Bell peppers can be thrown straight into stews, fajitas, and stir-fries. Plus, peppers last up to 10 months in the freezer.

How To Freeze Bell Peppers:

Here’s the lowdown on what to expect if you’re growing Bell peppers from seed.

Vegetative Growth: Around 6 weeks after germination, your plant will have a pretty robust root system. After 8 weeks, it’ll have plenty of leaves, and you’ll be able to transfer it to the garden. Add one plant to a 5 to 7-gallon container, or plant peppers in the soil about 20 inches apart to give them plenty of room to grow.

Flowering & Pollination: Next, your plant should start producing white flowers. Like most of the Capsicum family, Bell peppers self-pollinate.

Fruiting: Once your plant has pollinated, you should start to see your first peppers appearing within a couple of weeks. They’ll be small and narrow at first, eventually swelling into fully grown Bell peppers by about 14 days.

Ripening: Your Bell peppers will stay green for a while, but once they start to ripen, they’ll change to yellow, orange, and (finally) red. It’s at this point that they’re ready to pick.

On average, Bell pepper plants will produce between 5 and 10 peppers per season. The number depends on the size of the fruit, too – generally speaking, the bigger the peppers, the fewer you’ll get.

If you want to get the most out of your plant, make sure you place it somewhere that gets direct sunshine for at least 6 hours a day, in warm, moist (but not wet) soil. Following these steps will give you the best chance of achieving bigger peppers, and more of them!

Learn to grow any pepper with my step-by-step, illustrated ebook. It’ll help you skip a lot of beginner mistakes so that you’re more likely to be harvesting chilies during your first season!

How do you get Bell peppers to turn red?

Bell peppers turn red when they reach their final stage of ripeness. That means you’ll need to be a little patient. If you pick them before they turn red, you can leave them somewhere warm and dry to let them finish ripening over a few days.

Can you plant Bell peppers and Jalapenos next to each other?

The short answer is yes. However, if you plant Bell peppers too close to Jalapenos, there’s a chance they could cross-pollinate. This won’t affect your current harvest, but if you want to save the seeds – there’s a chance they’ll produce hybrid peppers, which are unusually bitter and spicy.

Can you grow Bell peppers from store-bought peppers?

To grow Bell peppers, you need mature seeds. So, whether you’ll have any success depends on what color your store-bought peppers are. Only pepper seeds from mature red, yellow, or orange varieties will do the trick. The seeds might also be hybrids – it’s impossible to tell by looking at them – so there’s no guarantee that your peppers will grow to be similar to the ones you bought.

Do all Bell peppers turn red?

Most Bell peppers turn red. However, some varieties will turn yellow or orange when fully ripe, while others will even mature to dark brown or white.

So, there you have it – the best time to pick Bell peppers is when they’re 3 – 5 inches long and the desired color. I hope you’ve found this article useful!

Check out the guide to picking peppers if you’re growing other chile varieties. And, if you’re interested in growing the best Bell peppers possible, here’s our ultimate guide to growing peppers from seed to harvest.