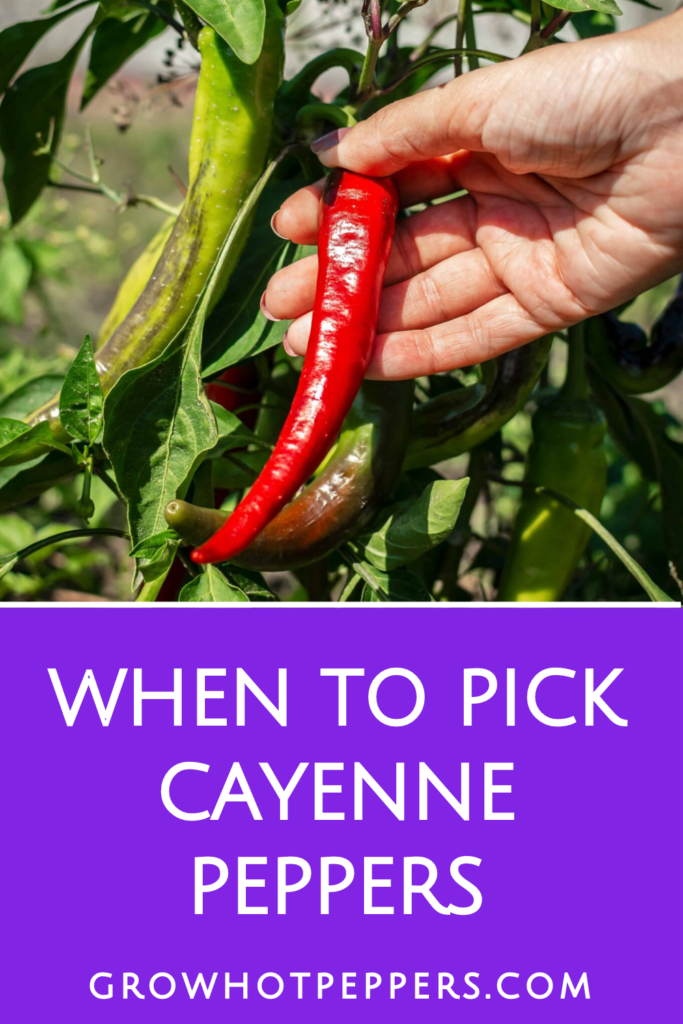 Do you need to know when to pick Cayenne peppers? These chilies are typically harvested about 70 – 100 days after transplant when they’re 4 – 5 inches long and vibrant red. Picking at the right time also gives you peppers with the best flavor and heat. We’ll get into all the specifics below.

Here’s what I learned the first time I grew Cayenne peppers:

If you don’t pick Cayennes in time, they’ll wrinkle and dry out. They can also soften and rot. I don’t want you to make my mistakes so it’s important to know when they’re ripe.

Besides the short(ish) harvesting timeframe, you may wonder why your Cayenne peppers aren’t turning red. How do you use fresh peppers after picking them? And, what do you do with green Cayenne peppers? I’ve rounded up all the answers in this article.

Let’s get straight into it!

The Cayenne pepper shares its name with a city in French Guiana, where it’s said to originate from. These delicious red peppers are part of the Capsicum annuum plant species, which means they fall into the same family as Jalapenos and Bell peppers.

As for size, Cayenne chile plants typically grow to a couple of feet tall, and healthy plants will produce between 10 and 30 ripe pods at a time. And, thanks to their strong flavor, they’re a popular ingredient in chili sauces, like Frank’s RedHot.

Cayenne peppers measure between 30,000 and 50,000 heat units on the Scoville scale, making them 6 to 10 times hotter than a Jalapeno, and up to 100 times hotter than a Banana pepper [source]. So, they’re not on blow-your-head-off levels of spice, but you probably wouldn’t want to snack on one raw.

Some varieties of Cayenne pepper are hotter than others, though. Take the Carolina Cayenne pepper, for example. It looks similar to the standard variety, but is twice as spicy!

When To Pick Cayenne Peppers Off The Plant

Ripe peppers will be packed with flavor and just the right amount of heat. So, when are Cayenne peppers ready to pick?

Days To Maturity: 70 – 100 days after transplanting

Appearance: Vibrant red, 4 to 5 inches long, firm, and with a waxy skin

For the best flavor and heat, it’s best to pick Cayenne peppers when they’re ripe [source]. If you leave it too long, wrinkling can start. If that happens, harvest them right away, before they start to dry out.

Just so you know, some varieties of Cayenne pepper differ in color. A Golden Cayenne pepper, for example, will turn – you guessed it – golden yellow when ripe.

Cayenne peppers should turn red a month or so after reaching their full size. If that doesn’t happen, there could be several reasons why.

First, the bigger the pepper, the longer it’ll take to ripen. So, if you’re still seeing a few green peppers on your plant, you might just want to wait it out another week or so.

The weather could also be a culprit. If you’ve had some frost or even a heatwave, your peppers might be damaged. The ideal daytime temperature for Cayenne peppers to grow is between 70 and 80°F (21 – 26°C).

Pests pose a problem, too. When Cayenne peppers start to ripen, the leaves produce fluids that are a source of food for aphids. These pesky bugs can damage the peppers, stopping them from fully ripening.

Learn to treat pests, vitamin deficiencies and other common pepper plant problems with this illustrated ebook. It’ll help you take action before things get out of hand!

How To Harvest Cayenne Peppers

Because Cayenne peppers are small, you can pluck them off by hand. Gently grip the branch with one hand, and pull the pepper up with the other, taking care to pull the stem off with it.

If you’re worried about damaging the branches, you can cut the peppers off with clean shears, instead. Anywhere along the stem is fine.

And, to get the most chilies from your plant, start harvesting Cayenne peppers regularly to encourage lots of growth.

If you prefer a milder flavor, you can pick and eat Cayenne peppers while they’re green. Or, you might just want to use them up if it’s coming to the end of the season.

As well as being less spicy, green Cayenne peppers have a slightly more vegetal taste. When diced, green Cayennes makes a delicious addition to salsas, salads and dips.

If you pick green Cayenne peppers when they’re close to ripening, they may still turn red after a few days. If that’s your goal, it’s best to keep them somewhere warm. Once they turn crimson, you can pop them in the refrigerator.

What Can I Do With Cayenne Peppers After Picking?

If you like spicy food, you’ll find plenty of uses for fresh Cayenne peppers. You can dice them and toss them into salads, salsas and relishes. Or, use them to liven up meals like chili con carne. Keep the seeds to one side – you can use them to grow new plants (more on this below).

If you’ve got a big harvest, you might want to preserve some peppers by drying them out. Dried Cayenne pepper is ideal for making homemade chili powder and red pepper flakes, which you can use to season everything from curries to steaks. Here are a few ways to dry out Cayenne peppers.

Food dehydrator: Take your washed, dried Cayenne peppers, cut off the stems, slice them lengthwise and take out the seeds. Next, spread them out evenly across the trays, seed side up. Then go ahead and dehydrate at 120°F (50°C) for 6 to 12 hours.

Oven: Place your washed, sliced peppers on a sheet of baking paper and pop them into the oven at 120°F. They’ll take around 6 hours to dry. Check on them every half an hour, removing any peppers that are well dried, and turning when necessary.

Ristras: If you’ve got a big haul of Cayenne peppers, why not try making a ristra? Not only do they look cool, but some people say they result in a bolder flavor. Just make sure you hang them in a well-ventilated space, and keep in mind it’ll take 3 – 4 weeks to dry peppers in this way.

How To Grow Cayenne Peppers From Seed

If you saved seeds from your last batch of Cayenne peppers, here’s an overview of how you can start new Cayenne plants from seed.

Growing Cayenne peppers starts with planting seeds indoors about 8 weeks before your last expected frost. Seedlings (young pepper plants) typically grow inside between 8 to 12 weeks. You can transfer Cayenne pepper plants outdoors after nighttime temperatures are consistently above 55°F (13°C) degrees and your plants are hardened off (toughened up).

Now let’s run through each stage of the Cayenne pepper growing process.

Seed Planting: To plant your Cayenne pepper seeds, simply push them gently into your seed-starting mix. It’s important to keep the soil moist and warm – just be careful not to overwater the seeds.

Germination: Most Cayenne pepper seeds will germinate around a week or two after planting, as long as the temperature stays nice and warm – ideally 80 to 90°F (27 to 32°C).

Sprout: Now for the first sign of life – sprouting! Once your seeds have germinated, you’ll see little green stems emerging from the soil.

Seedling: Soon, the sprouts will start to develop leaves. When this happens, congratulations – you have yourself a seedling.

Plant: Once seedlings grow in size, they’ll develop a robust root system, which means they’ll need a little more space. If the weather’s consistently warm, you can move them outside.

Fruiting Plant: Now for the exciting part – once the flowers have been pollinated, you should start to see your first green Cayenne peppers popping up. All that’s left to do now is wait for them to ripen!

» Related: Growing Peppers from Seed to Harvest – The Ultimate Guide

How do you store Cayenne peppers?

To get the most shelf life from your peppers, pop them in a plastic bag and store them in the refrigerator. To prevent them from rotting too soon, be sure to keep them dry.

Can you eat Cayenne pepper leaves?

If you want to use every part of your plant, the good news is that Cayenne pepper leaves are edible. They’re mild in flavor – similar to white pepper – and can be boiled and stirred into soups and stir-fries.

Do Cayenne peppers grow back?

With the right conditions, you can grow Cayenne pepper plants as perennials. Here’s how to overwinter pepper plants so that they survive the winter and come back next season.

So, if you were wondering when to pick Cayenne peppers, I hope this article answered your questions. In short – aim for when they’re red, a few inches long and firm to the touch!

If you’re growing other types of peppers, be sure to check out the when to pick chili peppers guide. You’ll find out when to harvest different varieties and get information on storing chilies.