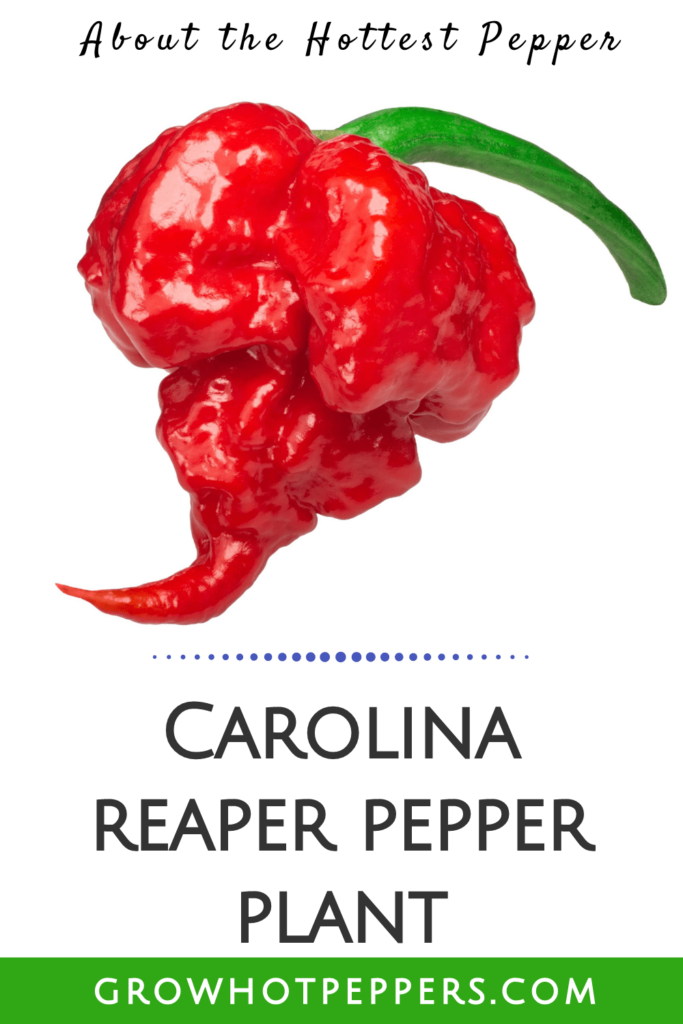 The Reaper is the (official) hottest of all super hot peppers. And, they deserve respect. I can’t think of another food that requires gloves, goggles and a gas mask when cooking with them!

(If you’re a grower, be sure to check out the video below so you can see how we germinated Carolina Reaper seeds in just 6 days.)

What Is the Carolina Reaper Pepper?

Ed Currie, known as “Smokin’ Ed,” is the one who made the Carolina Reaper. His interest in growing peppers came from wanting to know more about the health benefits of hot peppers and learning that capsaicin has the potential to fight cancer.

Originally called “HP22B,” this chile was made by crossing a Naga from Pakistan with a type of Habanero from the St. Vincent island in the Caribbean.

The Reaper pepper had been 10 years in the making at the time of the 2013 win. It was bred in Fort Mill, South Carolina, and it had its recording-breaking heat tested at Winthrop University.

How Hot Is The Carolina Reaper Compared To Other Peppers?

If you’re new to super hot chillies, it can be difficult to grasp just how hot the Carolina Reaper really is. We’ll compare it to other peppers to help.

The Ghost Pepper Scoville is 1,041,427 SHU at the top range. So if you’re comparing these two, the Reaper is about twice as hot as the Ghost Pepper on the high end.

The pods of the Carolina Reaper grow an average of 2 to 3 inches long (5.08 to 7.62 centimeters). And, of course, they have tails that look like stingers. 🙂

In addition, these pods start off green and end up red at maturity. The skin has a smooth, bumpy texture. Here’s a closeup of one of our Reaper peppers.

I have to warn you… Carolina Reaper plants are huge! Be sure to make a note of their size if you grow them too. (More on that below).

Here’s a quote from the Guinness World Records that describes what the Carolina Reaper tastes like.

The Carolina Reaper is described as having a fruity, sweet taste with a hint of cinnamon and chocolate undertones, as well as being hot.

I haven’t tasted raw Reaper peppers because our chillies haven’t ripened yet. (Personally, I’ll probably just try a small part of the tail when it’s ready. )

On the other hand, I have eaten Carolina Reaper leaves. They are large and taste like a delicious, peppery spinach. I’ll definitely harvest them whenever the plants are pruned.

Carolina Reaper peppers are insanely hot and eating them raw isn’t advised. That is assuming you don’t already eat super hot chillies on a regular basis. You have to work up to that level of heat!

Instead, Reaper peppers are excellent for flavoring soups, stews and sauces. They can also make tasty powders. (Wear gloves, goggles and a mask for protection!)

We almost didn’t grow plants this year. I got a late start to my planting season, but Jesse really wanted some Carolina Reapers.

The problem is that super hot chillies can take longer to germinate. I just didn’t think we’d have time to grow them from seeds.

(Carolina Reaper seeds can take 4 to 6 weeks to germinate.)

I warned her that she probably won’t get much (if any) of a harvest. Instead, Jesse said “challenge accepted.” 🙂 She said this as well:

The challenge part was because everything I read said reapers would take a long time to germinate if they germinated at all because I had such a late start :).

Basically I wanted to try the instructions from your Pepper Seed Starting Guide. As you know I didn’t want you to help me I just wanted to follow the instructions. I went through the guide, chose my growing medium (peat pots), ordered my seeds and a growing kit that included a lamp, a heat mat and the greenhouse tray. I also made sure to get a temp controller because I wanted full control 🙂

(By the way… Here’s The Pepper Seed Starting Guide Jesse used. She was a complete gardening newbie, and she wanted to go through my ebook to start her pepper seeds from scratch.)

One thing made a HUGE difference in getting the seeds to sprout quickly. (Again, time was an issue.)

It was doing the process of a seed viability test, which is also known as the “baggie method.”

Essentially, you use a wet paper towel, plastic bag that seals and a plant heat mat.

Here’s a video that shows how the Carolina Reaper seeds germinated in 6 days. (We were pretty excited as you’ll see in the video. 🙂 )

» Related: How to Get Pepper Seeds for Planting + Germinating Seeds Indoors

Here are some things to keep in mind.

The baggie method is ideal if:

Above all, it’s extremely important that you use a plant heat mat to create the warm environment necessary to start pepper seeds. Don’t skip it!

Here’s what makes an even BIGGER difference:

A combination temperature controller and plant heat mat keeps the temperature range consistent. An ideal range for pepper seeds is about 75 to 85 degrees Fahrenheit (24 to 29 degrees Celsius).

I had never used one before, as I didn’t think it would make much of a difference. It definitely did!

» Related: How to Care for Pepper Seedlings after Seeds Sprout

How big does a Carolina Reaper plant get? They can grow 6 feet (1.83 meters) tall and 4 feet (1.22 meters) wide! (I wish had looked this up before we put our plants in EarthBoxes.)

Here’s what they look like now. As you can see, they need more space.

To clarify, EarthBoxes are awesome for small space gardening and setting everything up just once so it runs on autopilot. However, make sure you know how big your plants can get before planting in them.

The Reaper plants are doing well, but they could be growing so much better with their own containers.

» Related – Transplanting Pepper Plants: When and How to Move Chillies to Bigger Pots

If you want to buy quality Carolina Reaper seeds, I’d recommend purchasing from Ed Currie’s Puckerbutt Pepper Company. This is where we got a lot of our seeds.

Likewise, you can find all kinds of pepper seeds, plants and pods on the Ultimate Pepper Seed Vendor List page.

Another one of my favorite resources is the Etsy online marketplace. This is my go-to resource for harder to find pepper varieties.

Lastly, you can always find all kinds of Carolina Reaper products, including foods, on Amazon too. For example, this Pacqui One Chip Challenge is a Carolina Reaper chip that is dipped in a black seasoning made from — you guessed it — the Carolina Reaper pepper. This one chip comes packaged in a coffin, contains a warning and is known as the world’s hottest tortilla chip!

You have a lot of options when it comes to hot sauce made with the Carolina Reaper.

For example, my personal favorite is called Reaper Squeezin’s from PuckerButt Pepper Company. What I really love is that this hot sauce is very flavorful. With extreme hot sauces like these, sometimes all you taste is the insane heat. That’s not the case with this one.

Also, I really love that the only ingredients are Carolina Reaper peppers and vinegar.

The Next Hottest Pepper In the World

As of this writing, the Carolina Reaper is still officially the hottest pepper.

But, you know there’s always another chile waiting to take that title!

For example, the Chocolate Bhutlah pepper could be next. It hasn’t officially beaten the Reaper, but lots of people who have eaten it say it tastes is hotter.

In addition, there’s Pepper X — another creation from Smokin’ Ed Currie. How does it compare to the Carolina Reaper? (Again, the Reaper pepper is 2.2 million Scovilles at its highest.)

No, only the Reaper peppers are hot. The leaves, however, are very large and taste like spinach when cooked.

How do you germinate Carolina Reaper seeds?

You can plant your seeds about 1/8″ (0.32 cm) deep in dampened seed-starting mix. Alternately, add seeds to a moist paper towel, seal it in a plastic baggie and put it on top of a plant heat mat as shown in our germination video. In each case, take care not to let the mix or towel dry out.

When is the Carolina Reaper ripe?

These peppers are ready when they turn red, which is their mature color.

So that about sums it up for the Carolina Reaper. Whether you’re a fan of the world’s hottest peppers or you want to grow them too, I hope you enjoyed this article.